Why We Need a PMP To Be President 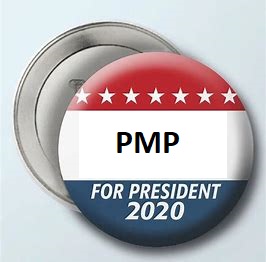 In late 1969, the Project Management Institute (PMI) was formed after two men, Jim Snyder and Gordon Davis, came up with the idea in Philadelphia, PA. Through years of growth, research and education, PMI has set the global standard for Project Management worldwide. in various disciplines in the business world and academia, in both public and private sectors. The first certification for Project Managers occurred in October of 1984 when 43 candidates of 56 passed the exam and received the much-coveted Project Management Professional (PMP) certification. (Webster, F.M. (1994). Project management certification: the history. PM Network, 8(11), 24-25). Since 1969, we've had nine Presidents of the United States. Since 1984, when we saw the first PMP, we've had six Presidents of the United States.


What do both timelines have in common? Not one PMP was elected President of the United States. Interestingly, not one PMP was a party nominee for President of the United States! Still, since 1969 of the nine Presidents of the United States, four of them were attorneys and since 1984, two of the six were attorneys. While that might not seem a strong enough case for a PMP to run a successful campaign and be elected President, it should be noted that since 1776, the breakdown of previous experience for Presidents of the United States shows that an overwhelming percentage have been attorneys! According to the Wikipedia article (https://en.wikipedia.org/wiki/List_of_presidents_of_the_United_States_by_previous_experience#By_the_numbers), twenty six Presidents were previously attorneys, four taught at universities, twenty two had previous military experience (with nine being Generals in the U.S. Army) and all but five held some form of public office.

It almost seems like it is a requirement to either be an attorney or be a Veteran. While both previous experiences and occupations are honorable, the skills and continuous training of PMPs must be considered. As a point of interest, you can look at the memberships of many PMI Chapters and see a significant number of Veterans that are PMPs or in the process of attaining PMP certifications. Lawyers, while their training and testing is rigorous, are often limited by the scope of the jurisdiction of the state where they practice, even if it's within the same industry.

In order to strengthen the argument of why a PMP should be the President of the United States, we should analyze some of the Knowledge Areas as defined by PMI's "Project Management Book of Knowledge" or PMBOK. Before we do that, we should look at the definition of a Project. As per PMI, a Project is an endeavor that is temporary with the expectation of creating a unique product, service or result. This addresses two of the ten Knowledge Areas; "Schedule Management" and "Scope Management". Since the Presidency is defined by the U.S. Constitution of consisting of no more than two terms, with each term being four years, we've addressed "Schedule Management". Keep in mind, that a second term is something that is approved by the "Sponsors", specifically the voters, provided that the first term's performance indicators shows positive value to the citizens, or "Stakeholders". A campaign promise by a candidate is the equivalent of the "Scope"; answering the question "What will the President do for the nation during their time in office?"

These two Knowledge Areas require one more Knowledge Area to make up the "Triple Constraint" and that is "Cost Management". This is an area that can be a deal maker or deal breaker for a Project Manager, especially if that Project is being the President. In order to get elected, or re-elected, a candidate for the Presidency MUST identify the Scope and a high-level estimation of the Schedule. In many campaign promises the candidate may say "As your President, I will increase the funding for education!" Really? How? And how long before we see the results? (Raising taxes, fees and budget cuts to programs may be ways to fund such promises.) Something similar is also said during the State of the Union address - the Annual Status Report. Once the candidate is elected, they may say something like "I've got a five-year plan to increase funding for education!" The problem with that is the end of the term is the end of the project. Is the President forcing the voters to re-elect them so that the President can follow through on their campaign promise? This is similar to pushing out the project's deadline and increasing the budget as a result of poor Project Management.

A PMP would pay close attention to campaign promises (Scope), the plan to complete the promise on time (Schedule) and how that campaign promise is funded including managing the financials (Cost) through Earned Value Management. A PMP, as President, would also effectively manage two other Knowledge Areas that encapsulate the Triple Constraint; "Risk Management" and "Quality Management". Using the campaign promise of funding education, there needs to be a comprehensive Risk Management Plan around that campaign promise. How is the risk of funds going to the several states and counties managed so that the campaign promise isn't a failure? In 1975, President Gerald Ford identified the risk of federal funds being "...used to support administrative paperwork and not educational programs" when he signed Senate Bill 6- "Education for All Handicapped Children Act of 1975". The entire speech can be read here: https://www.fordlibrarymuseum.gov/library/speeches/750707.htm. A PMP, would have identified the risk and managed the risk by working with the legislature on mitigating that risk. (This of course, would be two other Knowledge Areas; "Stakeholder Management" and "Communications Management".) To reiterate, there is "Quality Management" which works with "Risk Management". A President, who is a PMP, will understand that the campaign promises must be followed as closely to their plan as possible and will ensure that it is managed appropriately to ensure quality.

There are other Knowledge Areas that a PMP will address as well if they are the President. I've not addressed them here, but I would like to know what your thoughts are on "Resource Management", "Procurement Management" and "Integration Management". I'd also be interested in knowing your thoughts on what I've discussed here...until next time!
By Nicholas Tufaro, PMP at January 26, 2020
Email ThisBlogThis!Share to TwitterShare to FacebookShare to Pinterest
Labels: HomePage Knowledge Areas; PMBOK; PMI, PMP; POTUS; SOTU; Triple Constraint